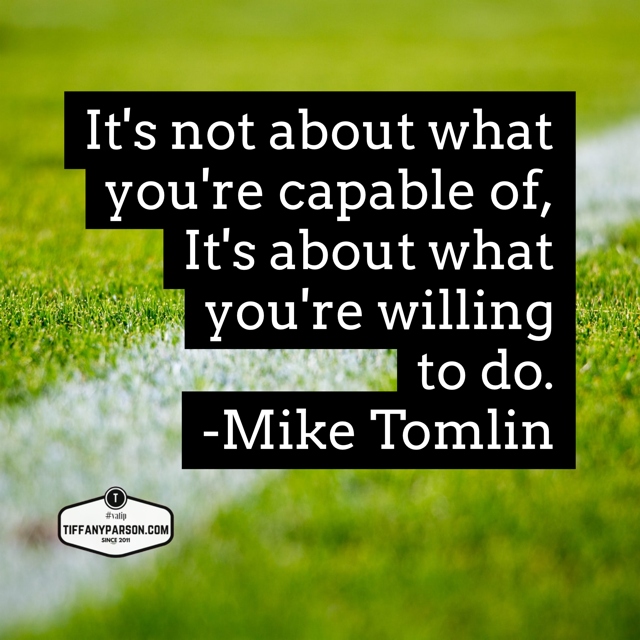 Hi and welcome to The Business of Being a Virtual Assistant. I am your host, Tiffany Parson, and you’re watching and listening to episode number 156 I just have one thing to say to you, and that is stop wasting time. We’ve got less than 90 days before the new year starts. What are you gonna do?

What are you gonna do about it? You have been watching and listening to this podcast. For how long?

A month? Six months? Two years? How long have you been listening and watching?

There is something that you have put on the back burner for whatever reason, time, fear, want to make it perfect?

Listen, in the less than 90 days that we have for the new year, I’m gonna put out a challenge to you to… do it anyway.

If you don’t have time, make the time. Here’s what’s gonna happen. If you wait until January, you’re gonna make up another excuse because you’re gonna be tired from the holidays.

You’re gonna wanna do something else. There’ll be another project or something else will take your time. There’s always things pulling and grabbing at us, but it’s up to us to block it and say no, no, no, no, no. And focus on what’s important for our business.

Okay, so let me help you out. For those of you that are afraid to mess it up, you’re gonna make a mistake. It’s not gonna work out exactly how you planned.

Oftentimes, things don’t work out the way we plan it. Many times they work out better than what we planned or does not meet our expectation at all.

Whether it turns out better or doesn’t meet our expectation, guess what? We’re gonna learn from the experience either way. Yeah.

One of my favorite things to do is to watch 30 For 30 on ESPN. And I can watch the same story over and over because I’m going to get something new out of it every single time.

Now, I didn’t play sports growing up. I cheered. And yes, if you were a cheerleader, you know, cheerleading is a sport, but the difference is we were not a part of the competition.

Every single week, we were not cheering to compete against the opposite teams cheerleading squad at the games.

If our team won, great. If they lost, not so great. But it didn’t really affect the cheerleaders.

And for us, that was like a disadvantage because we didn’t get the advantage of experiencing the wins and the losses.

As a player, we were in a few competitions, but it was not a regular thing. It was not enough to get used to losing.

And now fast forward to being a business owner and you wanna win, you want to do it right? You want it to be perfect.

But part of being an entrepreneur is losing. And it may seem crazy because you’ve worked a corporate job all this time and you’re used to you know hey, I want to raise I’m going to go for the raise.

I’m gonna go for this new position. This and that and you know the requirements. Here we are. Bam! You get it.

So maybe you’re not used to the NO’s and having to make it better and improve and keep going and keep pushing.

In spite of whether you have cheerleaders support along the side. If that’s something that’s been hindering you, I want you to think about a sports team every single week.

And I’m always like man, it’s amazing how the team that loses, usually they have good sportsmanship.

I don’t know if they usually address them by their position, usually by their name. But anyway, I’m like, wow, they just lost and they’re expected to talk and talk about why what happened?

Can you imagine if that is what happened to entrepreneurs? If we had a loss and we have to explain what happened?

Nobody’s coming with the camera and lights to ask you why you lost. Nobody is. And nobody may even know that you lost, so it doesn’t matter. It doesn’t have to be perfect.

It’s up to you in regards to your response, just like those players. How did they respond when the news person shoves that microphone in their face and they’re upset because their team lost and they’re like, hey, what happened? Or the coach? You know, he’s gonna be professional. He’s gotta be, you know, a pro for his team. He’s got to be the role model, show how its done.

And the flip side of that is the winner. They can’t celebrate too hard. Yes, celebrate, enjoy for the night, but guess what?

They got more games. They got more competition. They just showed all their plays to the world. So they gotta go back into, you know, the locker room, watch the film.

We gotta do it better than we did it, even though we won. So they can’t get all caught up in the hype of the win. Just like the one that lost can’t get all low and down on themselves because they lost.

They don’t even get time to do that, because that microphone is coming either way. So what can we learn as entrepreneurs for this as virtual assistant business owners?

What can we learn so we can apply this for the next? I was gonna say, 90 days when we got less than 90 days. What can we do right now before the New Year comes in?

All that stuff you said you were going to do? I know it’s a lot. The list might be long. Three things.

October, November, December. Take three things from that list that you were gonna do.

Start with three. Go in expecting to win, knowing there’s a possibility I can win or I can lose. You’re launching a new service.

Go in expecting to win now. You can’t just put it on your website. You gotta tell people about it. You have to make it public.

People have to know you got this new service and this is where we might get a little nervous. I understand.

I am right there with you. But remember, we’re like the football teams. We go in, Hey, we’re gonna win this thing. I’m gonna do this.

I want three clients to go into the new year. I want one client. I want five clients. I’m going to do this.

And no matter what, win or lose, it’s about our response. Because guess what?

We’ve got to come back. Oh, you won yesterday, but that doesn’t mean you’re gonna win today. But we’re going to keep going, expecting to win, right? I hope this is making sense.

I hope I’m a communicating with you. Because when I wrap my mind around what players have to do in order to stay in the game and keep their minds focused on the goal week after week after week, I’m like, you know what?

And these players, they’ll lose. I mean, you might have a team to have not won a game in forever, but they come back, they come back. Hype. Ready to go! We’re gonna do it this time!

The guaranteed way to not win is to not show up for the game.

Write them down. October, November, December. This is how you go into the year strong.

Forget about what you did yesterday. Last quarter, last month. It does not matter. You keep pushing, you keep moving. Because what matters is how you get up tomorrow.

Remember three things. Less than 90 days to push into the new year strong. And then when January comes, no, we’re not gonna be like “oh yeah, I’m coasting”.

What did I do? How can I make it better? How? What was the response? Did I get the clients that I want?

You know how to tweak the things. You know what’s holding you back. You know it. Don’t expect the cheerleaders on the sideline to cheer you on.

That’s your supporters, family, friends, whoever you’re expecting to root you on, forget them. If they’re there, great. If they’re not, so what?

I go into the virtual assistant business groups, and I am just like, ugh, because I want us to put our business caps on and not worker bee.

Yes, you’re a service provider, but you’re not a worker bee.

You know, somebody asked the question about “do you think this service will be good?”.

And I’m just like you’re a business owner. Who did Popeyes has asked when they decided to do the chicken sandwich?

Who did Burger King ask when they decided to have the impossible burger or tacos for that matter? Who did they ask?

With the tacos, clearly they didn’t ask a whole lot of people because think about it, Burger King…tacos. But they didn’t care, they put it out anyway.

And somebody has bought and tried the tacos. And they probably gone back to get them again.

So don’t wait for your cheerleaders. You be your own cheerleader. You show up for the game and you do it better and better every single time.

I want you to get excited about the less than 90 days for the New Year because you can blow this year out of the water based on what you do.

Also, I hope you’re following the facebook page, The Business of Being a Virtual Assistant. Not just following click like get the notifications because I’ll be going live on that page as well.

If you want to get on that list and you’re not on it, I want you to write this down or if you’re on your phone listening text 345-345 ‘VASTART’.

That stands for ‘Virtual Assistant Start’ altogether V A START. Text it TO 345-345 so you don’t miss any facebook lives that happen over there on the facebook page. Like it turn on the notifications as well so you can be a part of the community and join in.

I am excited and look forward to connecting you connecting with you over on the facebook page.

Let’s get in the game. You have a wonderful and fabulous day!