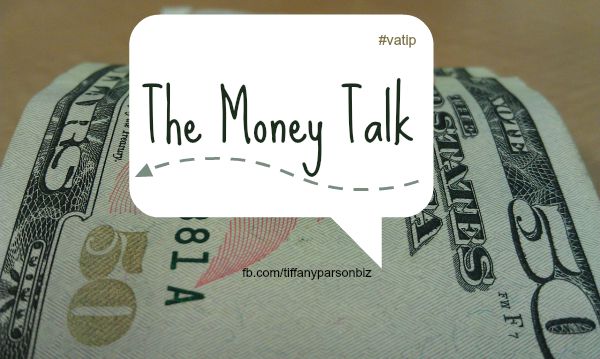 We’ve got to get comfortable talking about our money. #vatip

When we give our time, we can’t return it. #vatip

Missteps are blessings because it helps us to refine, rework, and get it right. #vatip

Are you having a problem getting paid? That’s what we’re discussing today. It’s a tough topic, but if it doesn’t happen a lot of things won’t be happening if we don’t get paid.

Now, I’ve talked to several VAs within the last week about how to get paid and not getting paid and what to do about it. As I was talking to one of them, it popped in my mind, you know, we should really talk about this on the podcast because I know it’s not just this few VAs, and myself included.

So I’m on Facebook like you do when you’re kind of thinking and just, you know, relaxing, being casual. Just reading things on Facebook and I’m in my Facebook group for my direct sales jewelry business and one of the ladies posted an inspirational quote picture in the group, and it doesn’t really apply to this group, but it was right on time for us and this podcast episode.

This is what it says, there’s no picture, just plain black image that says, “People love your work until they have to pay for it.”

So they love our work until it’s time to pay for it. I’ve got a few personal experiences in different scenarios and how I’ve refined my guidelines for invoice payments, and I’ve got suggestions for you on how to resolve this so you don’t have this problem again.

When I first started my business, everything was done through Elance. Elance is almost like a little protective bubble because if there’s any conflict that you have with a client that hires you through Elance, Elance will help you in getting it resolved. They also have the escrow fund, so your client puts that money in escrow so you know your money is there. You’ll get paid, you know, once the project is done.

If you’re doing hourly projects on Elance, clients are automatically signed up for auto pay. So if they have a credit card on file with Elance, you submit your timesheets on a weekly basis. This is for an ongoing project. You submit your time on a weekly basis. That invoice automatically gets paid; I think it’s like a week after the time it’s submitted. Timesheets are submitted automatically either on Sunday or Monday depending on whether you do Work View or you’re manually entering your time, and then it automatically gets paid. I think it’s about a week out. So, you know, it’s in a bubble for you.

When I am talking about are you having trouble getting paid, I’m speaking outside of the bubble of Elance or Upwork. Upwork is the new system. It used to be oDesk. oDesk and Elance merged. Now, the website that was oDesk, they’ve redone it. It’s now known as Upwork and I think next year Elance will roll into Upwork as well so we’ll be talking more about Upwork versus Elance.

Anyway, I’m talking about outside of that bubble, outside of that, just you and your client. Whether you met them locally or was referred by somebody, it doesn’t matter. You’re working with them outside of a protective bubble.

Well, first off, just know if you are communicating, and I always recommend you put things in writing through email, you email your client what the project is, what your rate is, what’s included, what’s not included, and they respond back. Not only do they respond back, but they pay your invoice that you send.

Now, the question is what do you do on that invoice? The easiest thing would be to say, okay, flat rate fee for their project. Period – all flat rates. But it’s not so easy. Okay. Let’s talk about flat rate in the sense that it’s not an hourly thing. Let’s say you are creating graphics for Instagram. You’re creating ten graphics. They just want you to do those ten. It’s not an ongoing ten, just ten. Ten graphics. You have a flat rate. They pay in full. That’s it. You do the graphics. You send it on. Wonderful. Beautiful. Done deal.

Let’s say you’re doing those Instagram graphics, but you’re doing ten every month. So you could decide if you want to make that like a monthly membership where it automatically recurs. So you set it up in PayPal as a recurring thing like a membership, which is probably the most ideal thing in this example, if you’re creating ten Instagram graphics a month. To have it be recurring, and of course, you know, whatever your cancellation rules. Let them cancel at anytime, you know, whatever the case may be.

All right, so let’s get outside of that. Let’s say you’re doing client care for them. You are answering questions that their clients have that come in through support. So their clients email support. You are answering the questions for them. You are doing that hourly, so maybe you have an hourly rate. If that is the case, your first response may be to treat it like you would if you were working at a store. Let’s say whatever your favorite store is, you’re working there. You punch in. You punch out. You’re clocking your time.

Well, in your virtual assistant business, I don’t recommend you do it that way, because you could easily have a problem getting paid if you’re doing the work up front and getting paid later. When we give our time, we can’t return it.

In the scenario with the Instagram graphics, if you send samples and you put a watermark or something on it to show that it’s sample, that it’s yours, and your client doesn’t like it, you could either change the graphic or refund them their money. Yes, you put time into creating the graphic, but you can resell that graphic or use that graphic for yourself so your time is not lost.

But if you were charging an hourly rate for email support or scheduling social media posts, if you’re charging by the hour, you can’t get that back. It’s already gone live. It’s already happened, you know, you’ve already accomplished the goal. So what to do in that case?

I recommend you have your client purchase a block of hours.

If it’s an hourly project, you want to charge hourly, it’s ongoing, you do a block of time – 5 hours, 10 hours, 15, whatever the case may be, and then that way they purchase a flat rate of 10 ten hours, being very clear what that includes and what it does not include, and letting them know as things progress that you’re getting closer to the end of their time, and then you decide from there. So that’s how you can get paid in that scenario.

Let’s say it’s a flat rate, but it’s a larger project. Maybe you’re designing a website. Maybe you are setting up their webinars from beginning to end, which is something that we specialize in is setting up webinars for beginning to end. You could have them pay all up front or do a deposit and structure it to where the live result, you get paid before everything goes live. So a deposit to get started and then a certain percentage before it all goes live, and then that way if payment’s not made, nothing goes live. That way, you know, they know again what’s included, what’s not included. They know what’s going to happen.

Now, none of this is foolproof, but it will ensure that you get paid for your time versus zero up front. You put in all your work and resources and have to fight on the back end to get your money.

So flat rate or a flat block of hours, which is still a flat rate based on a number hours. You decide what the rules are. Whether you’re going to, you know, like a data plan. Do the minutes roll over or do they not roll over. You decide. If they roll over, what’s the expiration? You decide.

So you learn as you go along. Yeah, you make missteps, but missteps are blessings because it helps us to refine and rework and get it right.

There has been two times where I didn’t get paid. One situation, the client was a regular. Well, we had worked maybe two or three projects, so I felt comfortable with her. I already had my rule in place, but I let it slide, and wouldn’t you know this time around we did two eBook covers and set up her product in 1ShoppingCart, and that was like in 2009. Never got paid for it, you know, she’s pushing back. Oh, this and that, whatever, and lesson learned.

Another case was where…to be honest, I don’t even remember what happened in that scenario. But anyway, things will happen. It’s okay. It’s a part of life. It’s a part of being a business owner. We jumped out here so we could set our own rules, right? So as we go along, we’re learning what works for us personally.

Now, these are just my suggestions. They’re not set guidelines. They’re not virtual industry standards. In fact, I probably am outside of the virtual industry standards in a lot of ways because I don’t look to the VA industry to set guidelines for me. I look at the people that do like coaching programs online and teach about social media. I look at them and how they do things because they are very current. Things are current and fresh and going along with where the market is going, and so that’s where a lot of things that I draw from and get inspiration from.

In case you’re ever wondering about that, yeah, I’m way outside the VA box. I’ve never been an administrative assistant. I was a programmer and my clients labeled me a virtual assistant and I accept it and embrace it, but I certainly don’t go by the VA industry standards in a lot of different ways.

Those are my thoughts. I want to make sure that you are getting paid. So be very clear and send out your invoices. Stand tall and confident in what you are doing and get money up front.